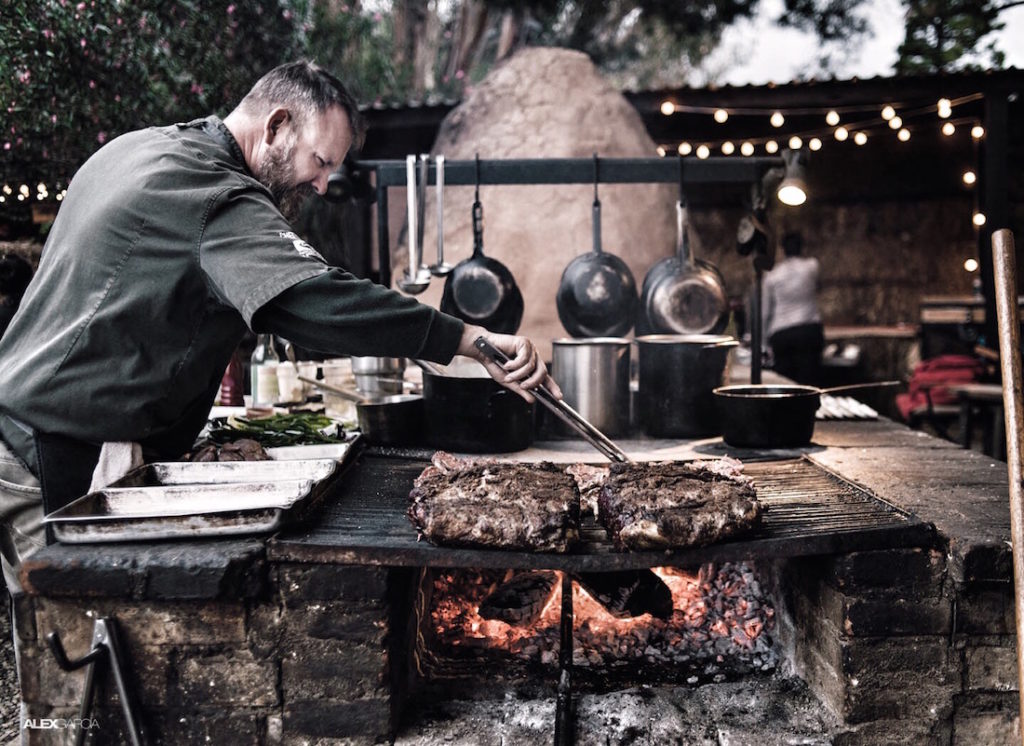 With a commitment to sustainability, Drew Deckman—who earned a Michelin Star for his work at Restaurant Vitus in Germany– joins the Rebelle Rally as its head chef in 2016. Deckman spent a decade in Europe honing his culinary skills at restaurants like the Four Seasons Berlin before landing in the Guadalupe Valley in Baja, Mexico.

According to chefsroll.com, Deckman has cooked with masters such as Paul Bocuse, Jacques Maximin, Gilles DuPont and Tommy Byrne. He also mentored under star-teacher and cookbook author Madeleine Kamman, in addition to being part of the final class of the School for American Chefs at Beringer Vineyards.

Today, Deckman is the proud owner of Deckmans en el Mogor where all the wine, vegetables, herbs, lamb, olive oil, and eggs are estate grown or produced on the Mogor Ranch.

A former commercial fisherman, Deckman is an avid off-roader, who recently started racing in his spare time. He grew up in Peachtree City, Georgia and holds a degree in philosophy from Rhodes College in Memphis, Tennessee. He lives in Baja with his wife and three children.

We caught up with Deckman to learn more about his passion for cooking, and his plans for the Rebelle Rally.

When did you know you wanted to be a chef?

Not until I was in my early 20’s. I worked in kitchens since I was 15, but never considered it as a career. I tried to do a bunch of other stuff, and it turns out that growing facial hair and cooking are the only things I’m good at doing.

Can you please tell us any highlight stories from your commitment to sustainability?

I think I’m in an interesting place in my life. I’ve worked as both a commercial and sport fisherman, and I have 25 years of kitchen experience. My desire to be an activist for sustainability doesn’t come from political or environmental philosophies, but instead from a desire to have incredible, responsible ingredients for a long period of time and that my children and their children have access to the those ingredients. The political part comes as a spin off of the whole circus. There is so much green washing and mis-information in the sustainability world its tough for consumers to figure it out sometimes. I feel a need to communicate responsibility to people in laymen’s terms and help them to make their own decisions.

We hear you love motorsports. Please describe your motorsport experience

I have always liked NASCAR and other motor sports. Not until I moved to Baja California did I really understand what off-road really meant. A good friend of mine Steve Barry, who has been successful in Baja racing in several different classes, allowed me to get close to his Class 1 team. I started out cooking for his team, then moved on to pre-running races with him, then on to some limited co-pilot stints in his Class 1. I caught the racing bug, and I’m now trying to start racing with my own car of some sort.

How did you hear about the Rebelle Rally (and what made you want to be part of it)?

My dear friend and mentor to a certain extent, Emily Miller, mentioned to me one day her idea about the rally, I didn’t even let her finish her sentence before I said, “I’m in!”

What are your passions outside of work? Besides your occupation, what makes you tick? Do you have creative interests?

My number one passion is my family–my wife and my daughter and my two sons. I finally have time in my life to attempt to learn how to be a family man, and I’m truly enjoying it. After my family, I enjoy blue water fishing (but working the boats, not angling) and I’m a PADI Divemaster. Oh, and I really like going fast on dirt in the desert of Baja, or anywhere for that matter.

What kind of meals do you have planned for the Rebelle Rally? What kind of food can competitors expect to eat?

This is a special event. We will be in remote places with the intentions of providing good, healthy, energy packed foods that make you forget you’re in the desert. We are doing breakfasts and dinners in several different base camps. My desire is that the driving teams arrive after a long day in the desert, and they are greeted by food they would expect in a city restaurant. We also intend to respect personal food philosophies (i.e. gluten free, vegetarian, vegan, etc). I am researching local growers and ranchers along our route, and intend to use as much hyper-local ingredients as possible

To the non-foodie, how would you describe your style in the kitchen?

My kitchen is based on ingredients. The three most important words in my kitchen are ingredient, ingredient, and ingredient. Complexity created through the mastery of simplicity. It’s definitely not minimalist or modernist or molecular. We find contrast through textures, temperatures and atypical combinations.

How will you source your food?

Have you ever served meals in such a remote location before? What kind of challenges do your foresee?

I worked several years on a large mothership where I was preparing food hundreds of miles from the closest port. I also worked for Four Stars Catering in wildfire basecamps for the National Forest Service. Those basecamps will be my model for the Rebelle basecamp operations. It’s a thrilling challenge to pull off good food in extreme places and situations. We will have weather, winds, dust, and mechanical concerns to contend with along the way.

What are you most looking forward to during the Rally?

I am honored to be part of the first Rebelle Rally. To be around so many motivated and positive people over a course of time is going to be great. I’m really looking forward to the camaraderie, the teamwork, and the new friendships that will be forged during this adventure.