As we approach the halfway mark of the 2022 Rebelle Rally, veteran competitors were looking forward to some familiar territory, but Rebelle Director Emily Miller made sure to throw in a few new surprises to keep ALL the competitors on their toes. Miller introduced the Ridgecrest Loop stage with the sage advice, “Manage your time wisely.”

The field was split up into groups to start and sent in opposite directions with one starting their day with an On Route Enduro and the other group heading over to the El Paso Mountain Wilderness and Spangler OHV to collect a string of CPs in any order they want before swapping over to the other portion of the course. This option to capture their checkpoints out of standard numerical order is a new challenge for competitors as they previously were unable to go backwards if they missed one previously. 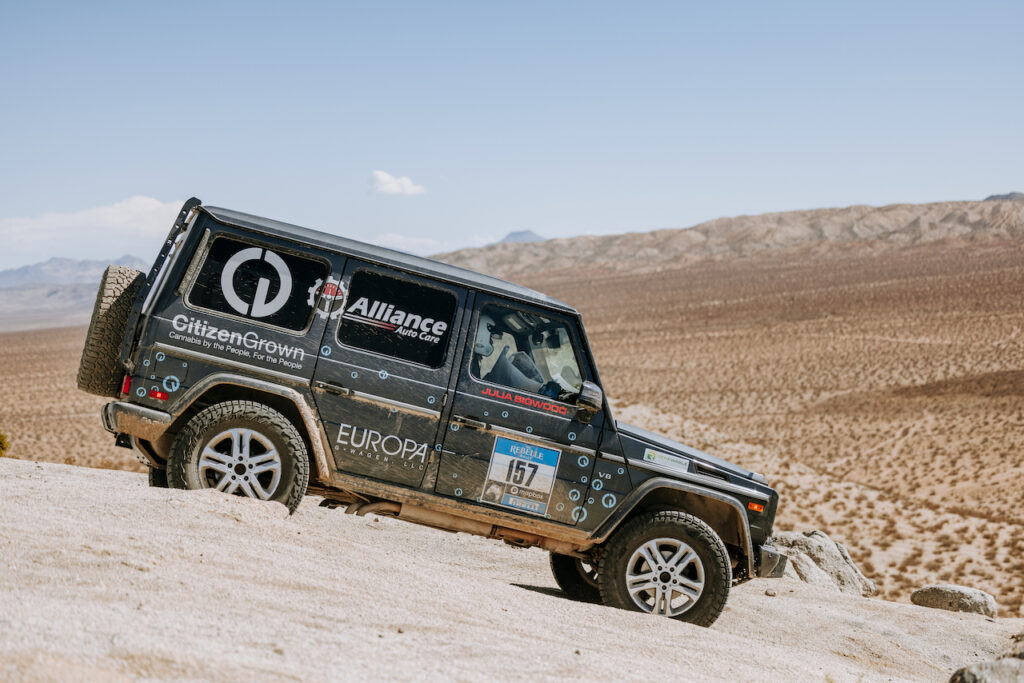 Drivers and navigators needed to work together to determine the best route to keep Millers’s words in mind. The On Route Enduro took the teams through Joshua Tree-covered hillsides and passing the Pacific Crest Trail. A new element of the Enduro introduced today was teams could decide between an X option roadbook and a regular route, the X option being easier to navigate but more difficult driving. With 35 checkpoints in the day (a Rebelle record!) the competitors had their skills pushed to the limit.

Despite the day’s difficulty, the biggest story of Stage 4 was all about two rookies and a Rivian who won the day with almost 20 more points than the second-highest scoring team. Team #187 Limestone Legends (Lily Macaruso / Alex Anderson) was the only team to garner over 90% of the available points today and took home the Daily Stage Winner title by showing hard work and training can make a difference. 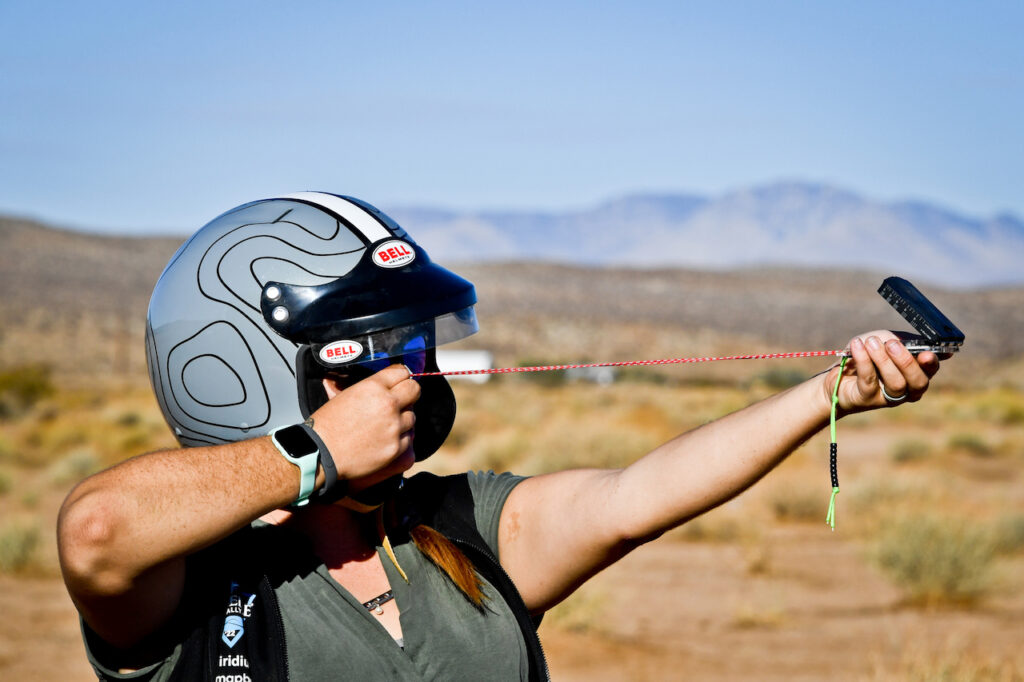 Despite this incredible finish, the rookie team told us that they haven’t been looking at their scores but it’s for a good reason, “First and foremost, we’re a team and in order to make sure we make the best decisions for our team, we want to keep ranking out of our thoughts.” said Lily Macaruso, driver of the 2022 Rivian R1T. “Typically whenever you have the pressure of understanding how much you have to lose, you treat things differently. You get an ego, you take risks that aren’t worth it. You stop thinking through your decisions and more about losing positions or individual points. We don’t want to do that.”

The challenges the competitors were contending with wasn’t just maps and enough time but also rough terrain that is brutal on the vehicles. Mechanics Director Nick Cimmarusti and his team of mechanics are considered wizards when it comes to helping competitors with their major issues but before he jumps in, teams will work on their own vehicles to lead the diagnosis and solutions. 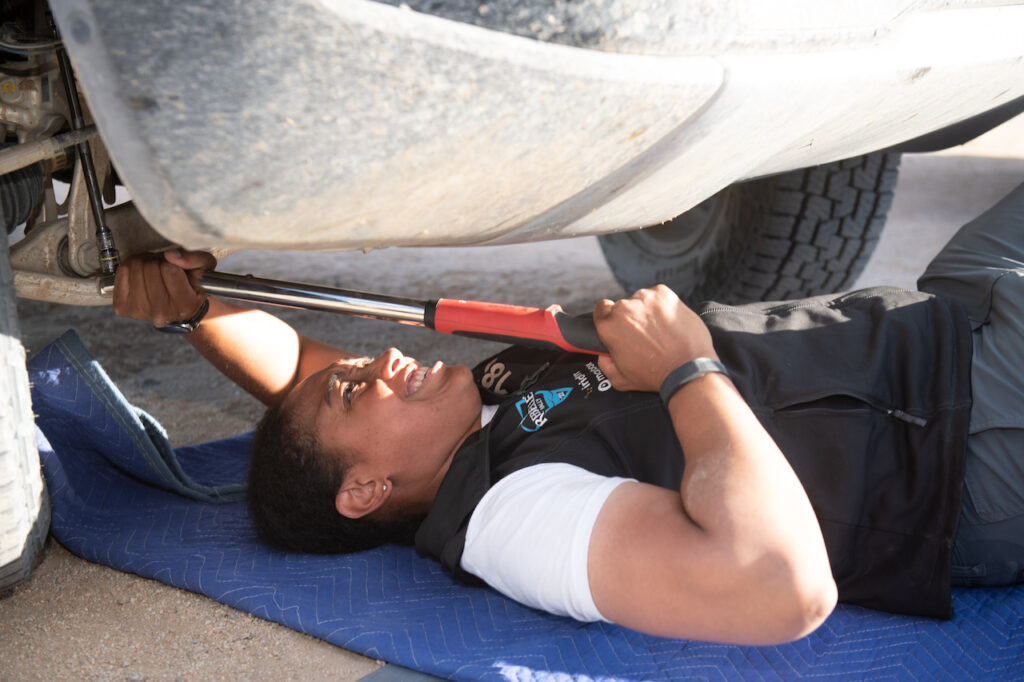 Regarding the looming terrain in Southern California Cimmarusti stated, “I think everybody’s very intimidated by the dunes, but we typically see the least amount of breakage in the dunes unless it’s a big event. Mostly we see damage in the middle of the course historically like Johnson Valley and Dove Springs, because it’s that jagged rock that’s very unforgiving and we get a lot of different sizes of whoops from the Trophy Trucks and the side-by-sides that come tearing through here. We get a lot of suspension failure, a lot of steering failure, and a whole bunch of tire punctures because of the sharp rocks.” 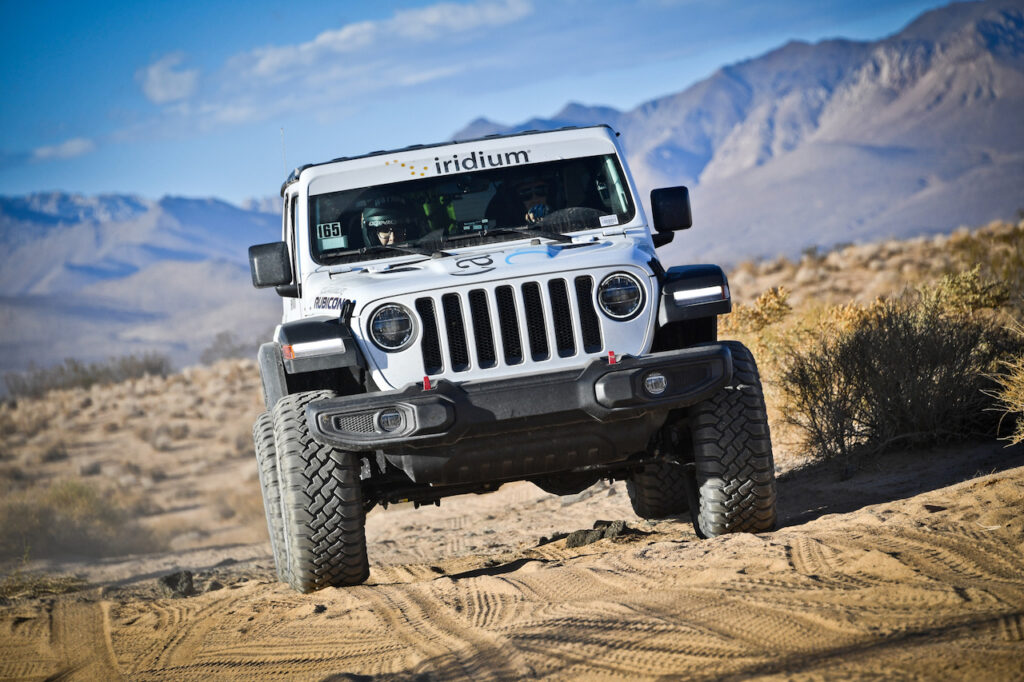 In standings news, still leading in the 4×4 class is Team #129 4xEventure (Nena Barlow / Teralin Petereit) with strong and consistent scores that show why this team will be hard to top this year. Chasing them is Team #188 Dirt Hustle (Laura Wanlass / Maria Guitar) who have had a few struggles but continue to get those CPs that have kept them in the top three for the first half of the event. Rounding out the top three is the dynamic team #150 G.O.A.T. (Shelby Hall / Penny Dale) who are ready to prove that they are a team to watch. 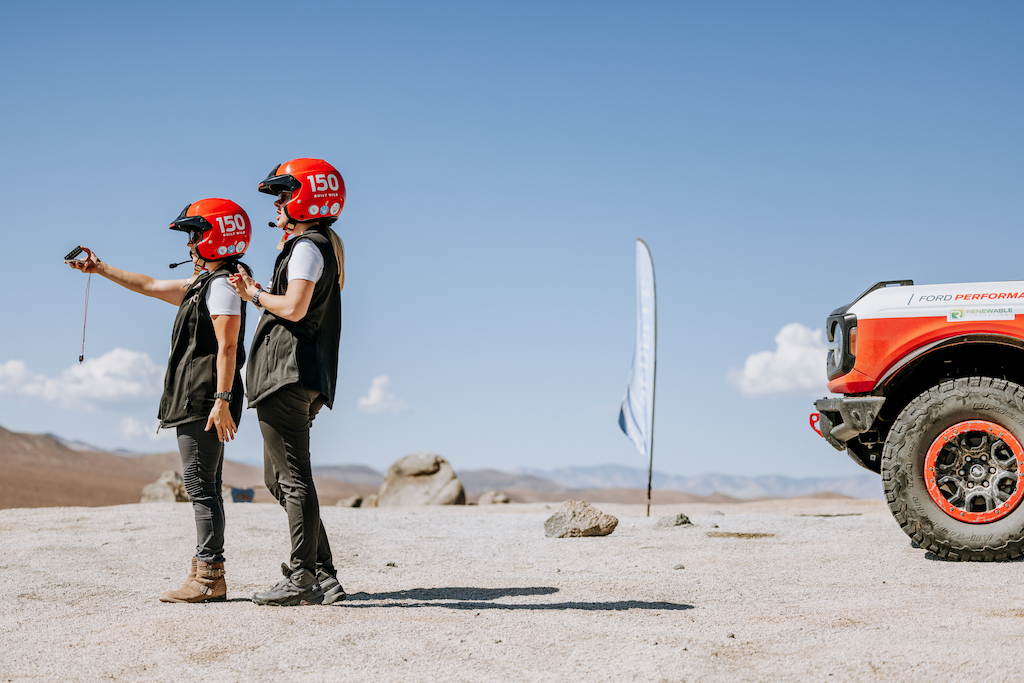 In the X-Cross™ Class, Team #200 Team Built Wild (Christine Benzie / Melissa Clark) continues to lead the group but have second place Team #216 Wild Grace (Lyn Woodward / Sedona Blinson) chasing with dogged determination. Rounding out the top three is Team #204 MtnSubie (Carey Lando / Angela Lux) who have impressed over and over again in their 2014 Subaru Outback. 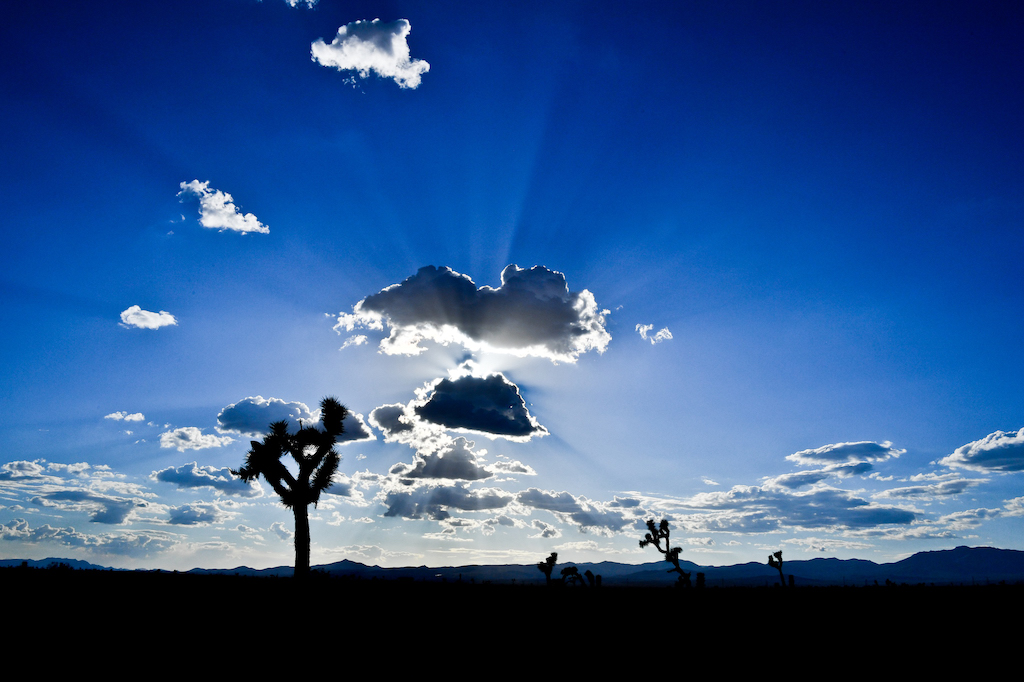 Stage 5 promises to throw the competitors another curveball with more Enduros for the teams to tackle as they continue their march south to the Southern border. Next stop for the rally? Historical Route 66.

Want to learn more about the women competing in the Rebelle Rally? Team bios are live now at www.rebellerally.com/2022-teams/

Enter to win $3,000+ worth of Rebelle-proven products in our 2022 Ultimate Rebelle Giveaway! 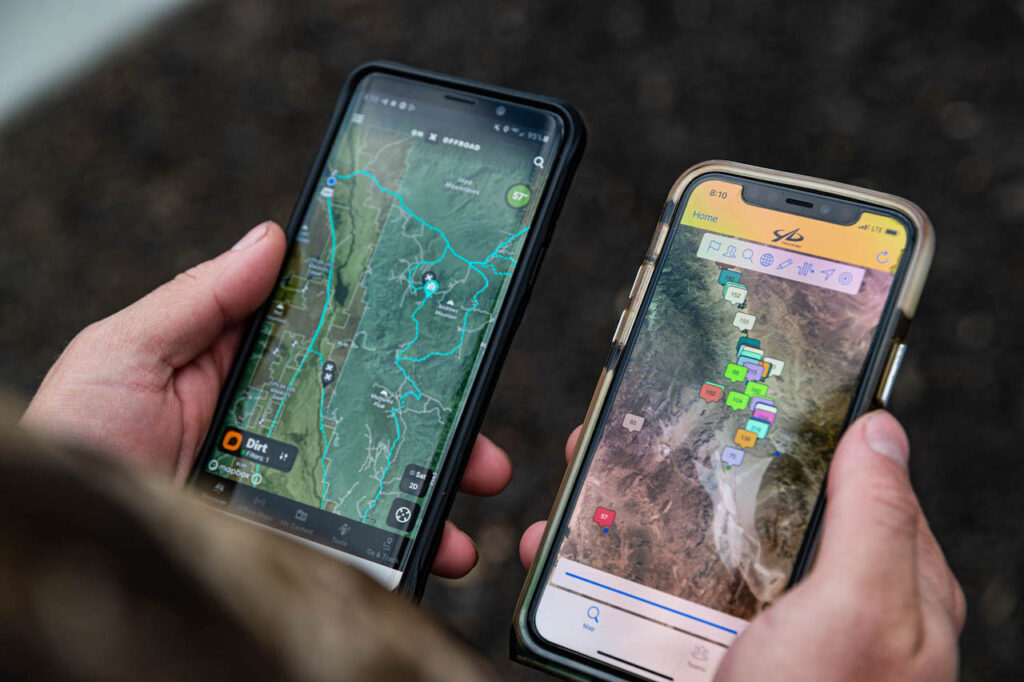 While GPS is not allowed on the Rebelle Rally, it is a crucial tool for establishing the route for the rally – and to help competitors prepare.  During the rally, the team of 100+ staff depend on onX Offroad to navigate their jobs on course.

Rebelle Founder and Director Emily Miller relies heavily on onX Offroad while planning the course, and competitors use their app to help sharpen navigation skills,  including terrain reading, waypoint finding and mock rally courses. With adventure just a tap away, users can find the off-road trails they want fast with color-coded open trails, land ownership and management data and filters on the map for 4×4 and recreational vehicles.