Manufacturers Step Up to the 2017 Bone Stock Challenge

The Rebelle Rally presented by Hoehn Adventures saw an influx of support from major manufacturers looking to showcase their vehicles’ abilities at the event. “The vehicle in your driveway is more capable than you think,” Rebelle founder Emily Miller explained. While the Rebelle Rally is not a race for speed, it is a durability test for the driver, navigator, and vehicle. The Bone Stock Designation was created for stock, unmodified vehicles to give them a platform to shine within the 4×4 and Crossover classes.

In order to qualify for the Bone Stock Designation, a vehicle must be stock, as delivered from the factory.  No modifications are allowed beyond aftermarket wheels and tires in the stock size. Given the number of Bone Stock entries equipped from the factory with performance suspension and drivetrain components, the manufacturers have risen to the challenge. 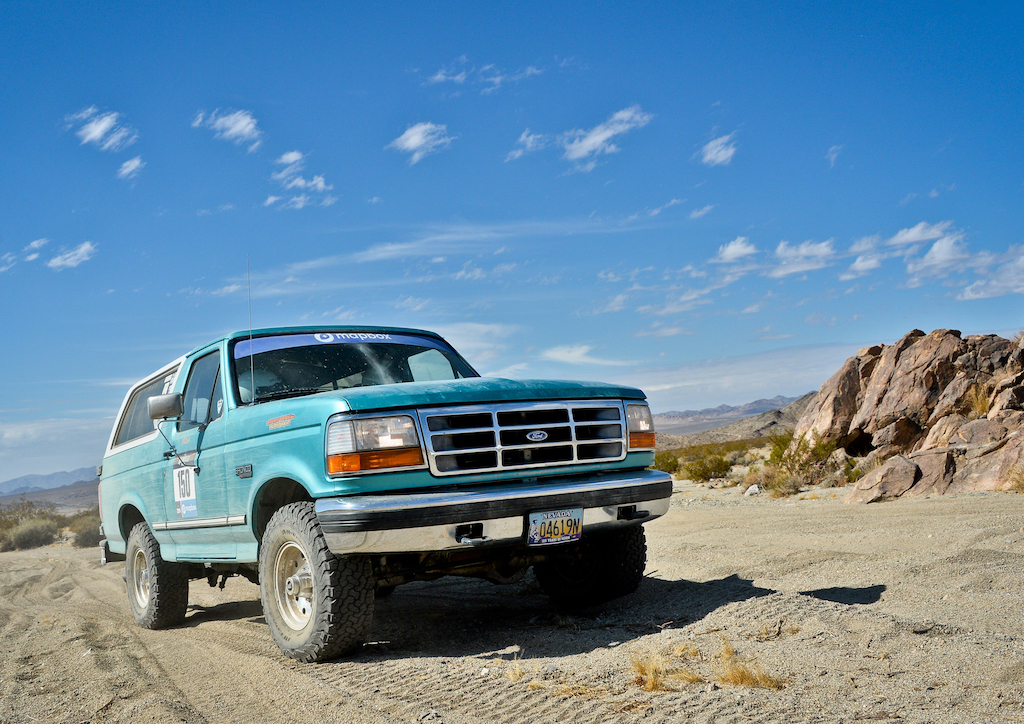 Last year Nena Barlow and Kande Jacobsen won the Bone Stock award in a Ram Rebel.  Equally impressive, they took 3rd place overall, suggesting that Bone Stock vehicles are just as capable as their modified counterparts – and often more dependable. This year Barlow returned in a Ram Power Wagon with teammate Chris Mayne as Team 4 Corners (#129). Barlow took home the Bone Stock win for the second year in a row, as well as 2nd place overall. When the dust settled, the team was a mere two points away from winning the Rebelle Rally. Given the capabilities of the vehicles entered this year and the skills of the women piloting them, it is not outside the realm of possibility for a Bone Stock truck or SUV to take home the 1st place prize.

The big brother of the Rebel, the Power Wagon, sports an even larger Hemi engine, a solid front axle, locking differentials, a factory Warn winch, and an electronic disconnecting sway bar for additional wheel travel in uneven terrain. “I have had the Power Wagon out in the dunes and couldn’t get stuck even when I tried,” Barlow reported. The competition was especially tough this year due to increased driving challenges that included more technical climbs and rocky terrain, and not to mention a field of fierce, well-prepared competitors. 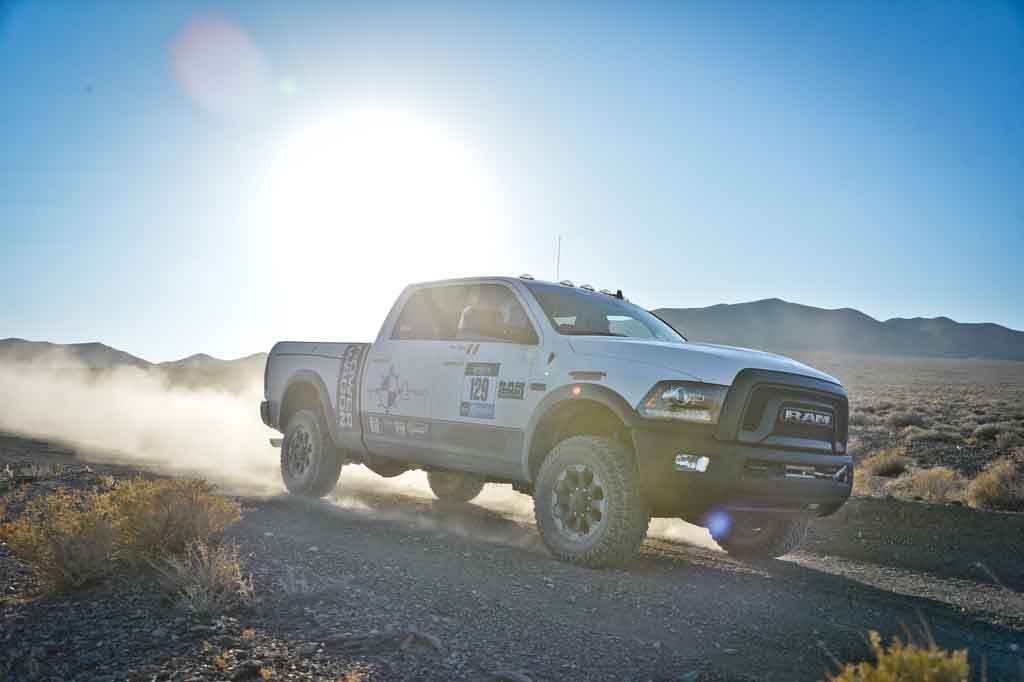 Driver Emme Hall and navigator Rebecca Donaghe competed in the inaugural Rebelle Rally in a modified Chevy Colorado, contending for the win right up to the last day of competition. Hall and Donaghe of Team Anemoiniacs (#140) came back this year piloting the new and coveted Chevy Colorado ZR2. The truck comes equipped with Multimatic shocks and locking differentials in both axles, in addition to a fuel-efficient diesel engine. “Ever since I first saw the ZR2, I knew this was the truck I wanted to drive in this year’s rally,” Hall noted. The vehicle impressed throughout the competition, but on the last day, the ZR2 had intermittent issues with the 4WD system, making it especially challenging in the steepest part of the Glamis dunes. However, the team stayed tough and focused, keeping their 3rd place podium position. 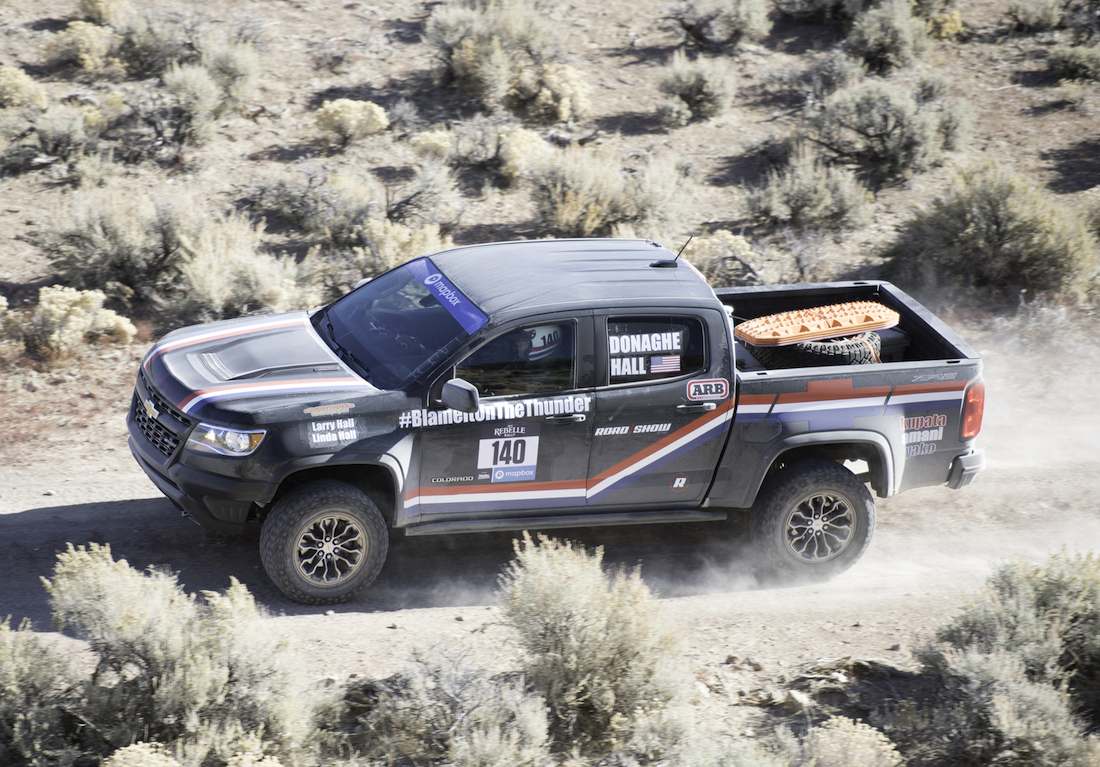 Sedona Blinson and Leah Heffelfinger of Team Wild Grace (#106) competed in a Nissan Frontier PRO4X in this year’s rally. “What brings me back for another year is the opportunity to do better, as well as partnering with a new teammate who is jumping in to challenge herself in new ways,” Original Rebelle Sedona shared. While the Frontier does not benefit from a front locking differential, the body-on-frame construction, locked Dana 44 rear axle, and powerful 261-horsepower V6 engine make it an incredibly capable machine. And although Leah was new to the Rebelle, she did an impressive job driving, especially in the toughest sections of the rally. The team finished 11th overall. 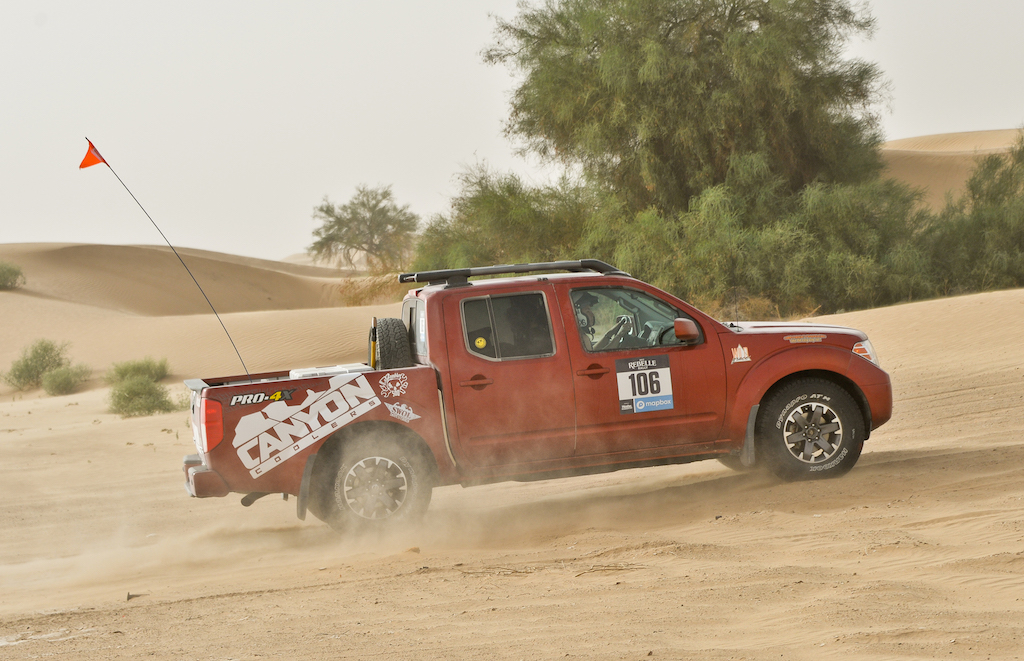 Fitting between the 3/4-ton Power Wagon and the midsize Colorado ZR2 and Frontier was the Ford Raptor. The second-generation Raptor boasts huge 3-inch internal bypass Fox shocks and a 10-speed automatic transmission to keep the twin-turbo V6 Ecoboost engine in the powerband at all times. The potent piece of machinery was piloted by Team NICE France’s Helene Becour and navigated by Armelle Medard Lang (#131), French competitors that were vying for the International Cup. Their long list of accomplishments include multiple wins and podiums in endurance navigation rallies. And while the truck performed flawlessly, losing their spare tire on Day 4 meant a loss of crucial points and a redefined strategy. The two took it easy in the rocky, difficult sections that followed, ensuring they made it to the finish line and earning them 16th place. 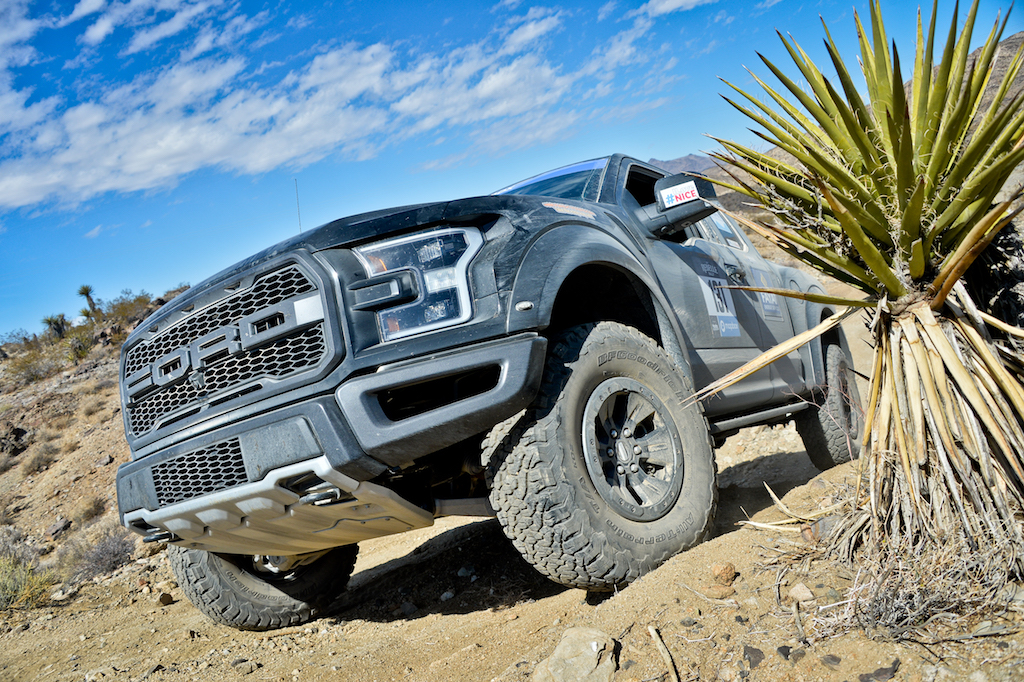 Nissan France didn’t just ship over a French-market Navara to compete against the slew of American-market pickups, but sent two of their employees as well! ”When Florence Pham and Karen Rayrolles presented their project to participate in the Rebelle Rally, the board of directors unanimously decided to support them in this fantastic adventure. The professional and personal development of its employees is very essential to Nissan,” commented Bernard Loire, Managing Director of Nissan West Europe. Like Team NICE France, Florence and Karen of Team Flowkey (#123) competed for both the Bone Stock Award and for the International Cup.

The Navara features a 2.3L twin turbo diesel engine, selectable rear locking differential, and unique multi-link rear suspension. While small displacement diesel engines are starting to gain popularity in the United States, they are a staple in the rest of the world due to the generous torque output and the fuel-efficient design. The Navara performed well, and despite less ground clearance than much of the competition, the duo finished in 6th place. This was the highest finish this year for any team comprised of newcomers to the Rebelle Rally. 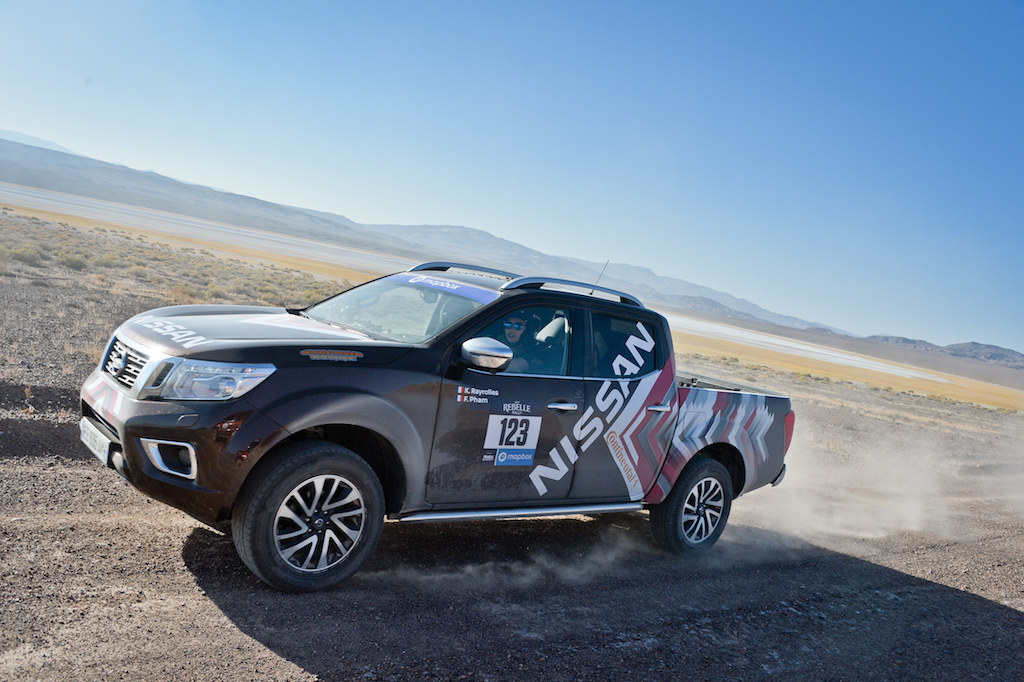 Not to be outdone by the trucks, Lyn Woodward and Nicole Honstead of Team Rubicon Recon (#157) drove a Jeep Wrangler Rubicon Recon. The name is a mouthful, but each word adds a layer of performance. Jeep is synonymous with off-road, and the Wrangler is the brand’s most iconic model with solid axles, a full ladder frame, and a removable top. The Rubicon designation adds selectable locking differentials to each axle, a 4:1 geared transfer case for added torque multiplication, an electronic disconnecting sway bar, and 32-inch tall BFGoodrich Mud-Terrain tires. The Recon is the best of the Rubicons, with a heavy-duty Dana 44 front axle and a ventilated hood that is beneficial in the harsh desert environment of the Rebelle Rally. 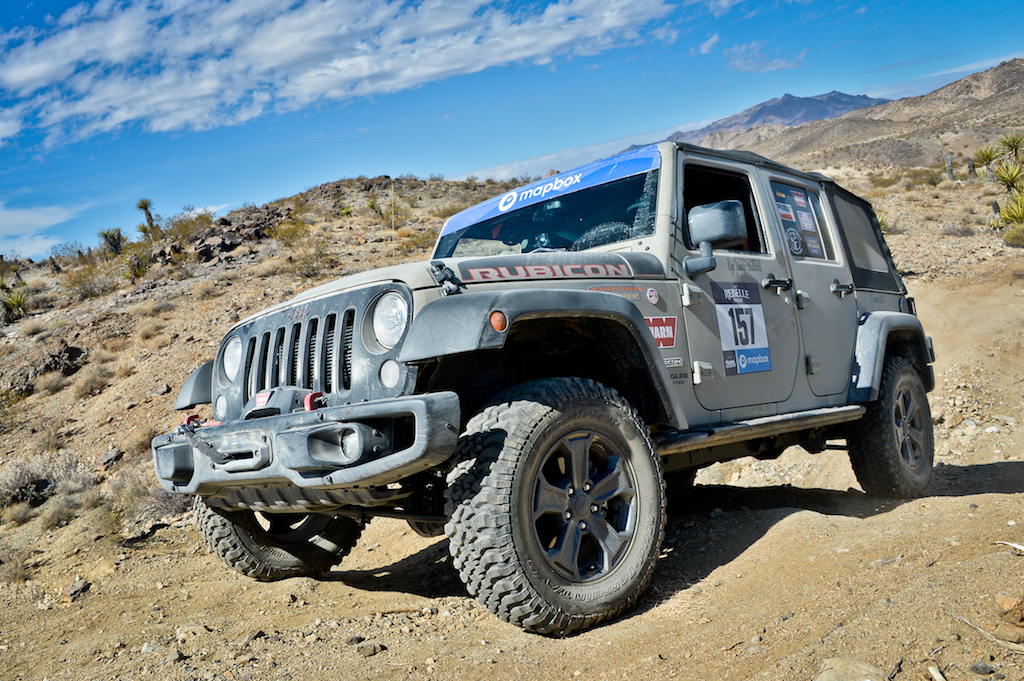 While the intention is to show respect for teams who choose completely stock vehicles, the manufacturer entries were exceptionally capable. “Performance shock absorbers allow teams to travel easier over rough terrain, and prevent fatigue,” Rebelle founder Emily Miller noted. “And locking differentials ensure that both tires have power applied in loose terrain such as sand and silt, reducing the impact on the terrain and increasing traction”. These features are a solid advantage in the Rebelle Rally, and it is impressive to see manufacturers offering these components as standard equipment and using the Rebelle as a platform to showcase their vehicles.